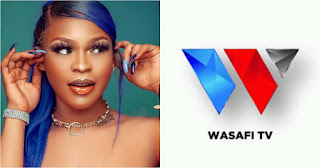 Just a few hours ago TCRA’s acting director Johannes Kalungule went on to reveal that the Tanzania communication regulatory Authority (TCRA) had decided to suspended local entertainment; Wasafi TV for Six months after violating broadcasting regulations during the – Tumewasha festival.

According to TCRA, this happened on 1st where Giggy money was seen performing in a ‘nude’ outfit.

And Tanzania being a religious country that supports both Islam and Christianity; the TCRA then considered Gigy’s mode of dressing indecent.

With this ban, Wasafi TV was required to stop broadcasting with immediate effect; And so far it appears that Diamond Platnumz team has stopped airing.

However thanks to a a new post shared by the young Simba; he goes on to say that this will not stop him from serving his God given purpose on earth.

In a new statement shared through his IG page, Diamond Platnumz went on to talk about God giving people good positions in life; and instead of using them to reach out to more people – they use their positions to bring others down. He wrote;

But since what has been done cannot be undone, Diamond concluded his message saying;