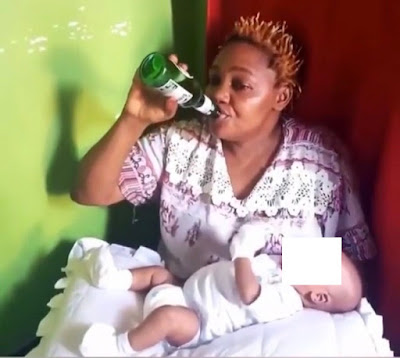 Singer Sister Fey has left tongues wagging on social media moments after sharing a short video; where she is seen drinking an alcoholic drink while holding her newborn.

Sister Fey who is known for her dramatic ways this time around seems to have impressed none of her followers; thanks to the now deleted video shared on her page.

This is after receiving many comments from worried fans who could not believe that she would risk her own child; just to have some fan while the whole world watched. Seeing how negative the comments were, the lady not only deleted but issued an apology.

Through her Instagram page, the lady who is also married to an ‘artist’ Hollystar went on to share a heartfelt apology. As seen on her page the lass went on to admit that sharing the video was immature; and insensitive especially with the fact that her baby was on her lap.

The lass went on to write;

This however did not work out so well since she also seems to have also deactivated her account moments after her apology.